Out now! Nobody Of Any Importance: A Foot Soldier's Memoir Of WW1

"All"! Well, we'll see, but welcome to whoever's out there, on behalf of my father and from me as, just the 35 years after Sam Sutcliffe started writing his memoir of a foot soldier's life at Gallipoli, the Somme and all the tricky bits before and after, young Phil - that's me, 67 last Sunday - finally finishes editing it and gets it out there via the miracle of e-book.

Here's the link to buy it if you care to in UK (which I missed before editing this blog just now, sorry) click here or in US (I think) click here. 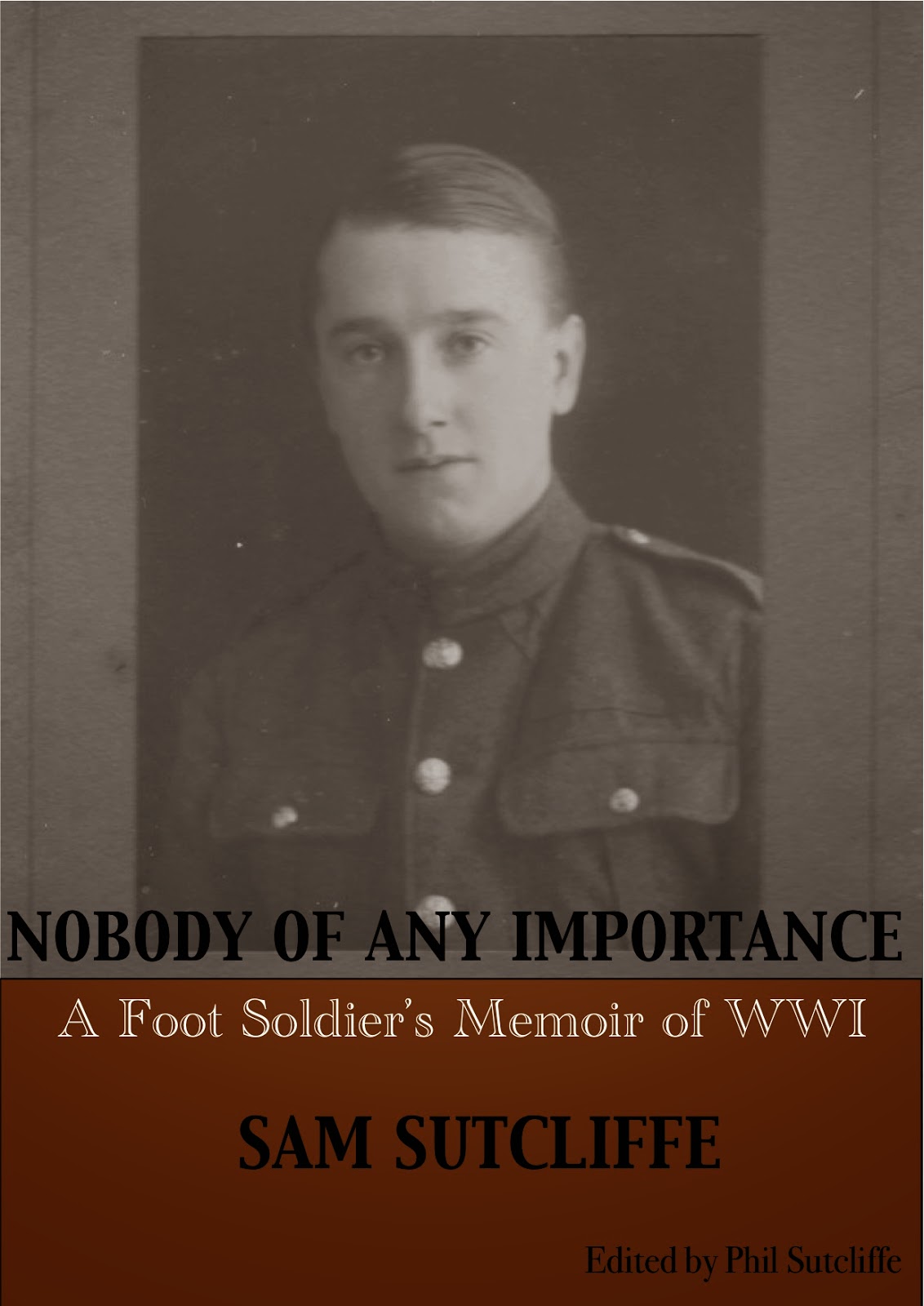 Price in UK is £5 and, in my father's memory, all author/editor royalties for the e-book will go to the UK Red Cross, a cause he would approve of, given they saved his life at Gallipoli and probably later too - to be clear, that means the Red Cross will get 35 per cent of what you pay on Amazon, and somewhat different amounts and percentages on other outlets when we get to them. It's 700 pages+ of his near-total-recall memory from north London childhood to the peace parade that really affirmed it was over in July, 1919.

If I can keep going, I want to update this blog weekly for the duration of WW1's serial Centenary by featuring short excerpts from the book relevant to what was going on 100 years ago this week, the next week and thereabouts - what my dad called his "Nobody Of Any Importance" story running in parallel to all the macro memorial events.

FOOTSOLDIERSAM SPEAKS:
First excerpts from the e-book coming up, but I'm sure I'll need to set the scene somewhat.

One thing I have to explain about the first two parts of the book - covering his childhood and through to the early months of the war - is that my father chose to write about himself in the third person. So Tommy Norcliffe is Sam Sutcliffe, although observed from "outside". After a while, Dad gave that up and wrote as "I" for the duration. Well, he was no professional historian. It really is memoir/autobiography from the start.

So to the history. As you know, the assassination of Archduke Franz Ferdinand on June 28, 1914, in Sarajevo, set the dominos of war declarations tumbling all over Europe and beyond for a couple of months to come. A hundred years ago today (writing on July 19), the treaty breach that got Great Britain officially involved had not yet occurred. But in writing about his early teens, particularly the period after he left school at 14 in 1912, my father often referred to popular worry and/or excitement about the likelihood of war with Germany - further stirred up by the weekly fiction magazines of the day which propagated a whole sub-genre of "invasion scare" fiction.

A series in Pearson's Weekly, Sam recalled, "described the invasion of Great Britain by German Forces, detailing the Channel crossing, landings on the beaches, battles through Kent and Sussex villages and their eventual approach to London. Ordinary people had for some while generally accepted that war with Germany was inevitable and they read this carefully constructed story of a surprise attack with excitement and, perhaps, concealed fear. Tommy and others of his generation could not see what would prevent the Germans from achieving their objective if they landed along the low-lying coasts. No great mountain ranges between there and the capital…"

A little later Sam writes: "One weekly magazine, John Bull, edited by Horatio Bottomley, a man able to discern what line of thought would arouse millions of partially educated people, used the war to excite the masses to do things which always had the ultimate result of putting money into his pocket. At meetings advertised in his publication and where he was the chief speaker, he would advocate donating money to the John Bull Victory Bond Club.


Tommy often read this weekly paper when his father had finished with it. The fiery patriotism impressed him, the condemnation of the foul enemy with whom we were at war, the constant watchfulness the editor and his staff maintained to discover and expose traitors in high places. He, and thousands of others, began to believe that this man could be the leader and saviour of Britain and the Empire."
And so the talk gathered pace and fervour: "Although the routine of living continued for Tommy, his family, and all around him, excitement mounted daily as events abroad, culminating in the assassination of a royal person, led many to believe that a war in which Britain would be involved was imminent.


The morning paper, which Pa bought on his way to the station with two of his sons, was eagerly read by their mother and the other children in the evening.

"On the train to work men loudly and strongly expressed opinions about events and prospects and Tommy listened. At the office, the Sergeant* really let himself go on this one; he believed the prospective enemy, the Germans, had always intended to attack England, but that our well-trained Army would soon finish them off once the two forces were face to face. Too old for active service himself, he would be doing his bit for Britain through that job at the War Office he had told the boys about.


"Meanwhile, brother George, sunburnt and lusty after a fortnight at a camp for assistant Scoutmasters, frequently talked about England going to war and what part he might play in it. He encouraged Tommy to join him and two friends of his own age, Len Winns and Harold Mellow, in long walks at the weekends. Then, when they stopped to rest and eat their sandwiches, a pack of cards would be produced and they’d play their favourite game, solo whist. But discussions of war always cropped up. Exciting speculations on how long it would last might vary between a few months and several years."

* The commissionaire at the City mining company offices where Sam worked as a junior office boy, 1912-14.

Hope that's a good taster. Until next week?

Copyright © Sam Sutcliffe 1987 & Phil Sutcliffe 2014. The moral rights of the authors are asserted.