Sam gets to know Marie-Louise and her mother thinks he’s très gentil… but she’s married and he’s keeping his mind on apples and pears.

Did a member of your family fight in WW1? Do write a guest blog contribution in Remembrance for FootSoldierSam… Please send by email Free Memoir to contributors.

A hundred years ago this week… On the Western Front the last few costly blows were struck while the strategists considered that odd business of pitched battle bedding down for winter.
In the northern part of the Somme Front, the Battle Of Ancre Heights saw the Canadians advance (October 26) and the British attack Beaumont Hamel and Serre with teargas, phosgene and phosgene/chlorine mortar bombs (28) before bad weather (29) stopped the fighting for a couple of weeks. At The Battle Of Transloy, after a British advance (23), the German Army settled into effective defence aimed at holding their ground until winter called a halt.
But at the First Offensive Battle Of Verdun (the French name for it translated), begun on October 20, the French Army recaptured Fort Douaumont (24), then several other key points, and by the end of the week had begun an artillery bombardment of Fort Vaux (one source notes that all this took them back to the positions they’d occupied in May).
On the Eastern Front, the Russian Army’s loss of impetus continued as the German Army drove them back from the left bank of the river Narajowka (October 22; Galicia), and across the river Schara, near Minsk (27; now Belarus), although they showed they still had victories in them at Vatra Dornei (25; then Bukovina/Moldova, now in Romania). Similarly, their support for Romania in the Battle Of Transylvania (began August 27) wasn’t going well. The combined Bulgarian-German forces defeated the Romanian Army at the Predeal Pass (23) and Cernavoda (25), but did find themselves on the retreat in the Jiu Valley, Wallachia (27-9).
The Allies most complicated alliance (Serbian-French-British-Italian-Russian involvement) did rather better in Macedonia as the Monastir Offensive (September 12-December 11) continued to beat back the Bulgarian invaders – who had driven the entire Serbian Army into exile earlier in the year. In the Battle Of Cerna Bend, the Bulgarians abandoned Cerna Voda (October 25), but that part of the conflict remained mainly bogged down causing heavy casualties (Bulgarian-German 26,000, Serbian-French-Russian12,000 before it ended in November).

Meanwhile**, my father, under-age volunteer Corporal Sam Sutcliffe from Edmonton, north London, 18 on July 6, 1916, had fought with the Kensingtons Battalion from mid-May to September, at Gommecourt on the north end of the Somme Front, then around Leuze Wood and Morval to the south. About September 30 he was told his age had been officially noticed, he was still legally too young for the battlefield and he could take a break until his 19th birthday if he wished. He wished all right – though not without a sense of guilt. That same day, he left the Front for the British base camp at Harfleur.
For Sam, who joined up in September 1914, this followed a ’15-’16 winter at Suvla Bay, Gallipoli, with the 2/1st Royal Fusiliers (200 out of 1,000 avoided the lists of shot, shell and disease casualties – Blogs dated September 13, 2015, to January 3, 2016). They’d sailed to France in late April, 1916, where – to their disgust – they were disbanded and transferred to other outfits… Sam to the Kensingtons and the Somme front line – where, on July 1, they’d suffered 59 per cent casualties (see FootSoldierSam’s Blogs dated June 26 and July 3, 2016).

FOOTSOLDIERSAM SPEAKS
Last week, Sam decides to go along with his crafty old Royal Fusiliers comrade and caterer Archie Barker’s lie that he had been a grocer pre-war and thus moves into a short, happy career in the Army café business – on the unofficial side as Archie’s establishment seems to be a private enterprise run for the profit of the Captain Quartermaster.
Second morning in Harfleur, he found himself transported to nearby Le Havre as buyer for Archie’s caff – and, after struggling because of his own limited French and all-round ignorance of his new job, he has the great good luck to meet a young Frenchwoman who runs a grocery with her mother, speaks good English and is willing to help. As he wrote in his Memoir, her name was…

‘Marie-Louise Baudlet; I suppose I can mention her full name now as she was somewhat older than me – I can only estimate 21 or 22 – and she must have passed away long ago.
She wasn’t pretty, but quite attractive, dressed in severe black with white trimmings. She probably looked older than her years, bright, smiling eyes. She made me welcome. She spoke perfect English and told me that, before the war, she had made several visits to England and stayed with relatives in Richmond, Surrey; my translator, then, ready to hand.
Her mama was probably nearer 50 than 60. She had no English, but she did me the honour of hinting that I was très gentil and I could only guess why and be suitably flattered. Perhaps gentil represented her hope more than her opinion. Perhaps soldiers in the shop previously had not been gentil…
I soon had a friendly working arrangement with Marie-Louise. I bought what I could – as much as possible of what they had to offer. But, as Marie said, items of which I needed a large quantity I would have to buy in the market; so, apples, other fruit and fresh vegetables, butter (selling cheaply from a counter run by a Belgian lady) – all luxuries for the soldiers.
Each morning when we took the wagon to Le Havre, before I went anywhere else I called in at Marie-Louise’s place and asked her to tell me the French words for what we wanted and for the quantities – hence, no further buying difficulties at all! From her place to the central market, the Halles Centrales, was quite a few hundred yards. I had the driver stop the wagon outside. He made himself comfortable in his seat to wait for me.’ 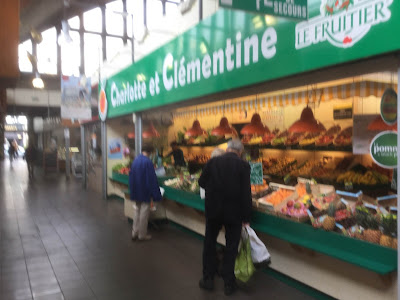 ‘Back at the canteen, Archie taught me to make thin, very tasty sandwiches. Tinned salmon was favourite. I’d empty a can into a large bowl, beat it up adding salt, pepper and vinegar and tasting it from time to time until I got it just so, that slightly salty mouth-watering flavour to make the ideal sandwich. We sold dozens of them. He taught me to build them up in pyramids — placed out of reach of the troops, that was important, but visible and tempting. On the evenings the lads were in the money, the two of us often had difficulty coping with the great rush of trade.
More money became available to buy fresh vegetables, and I bought apples and sometimes pears on a bigger scale too.
The whole business reminded me very much of pre-war days when sometimes, to order a lunch for the partners at Lake & Currie, I’d go to Sweetings*** or Binns, famous restaurants, where they displayed their sandwiches stacked in pyramids and the clients ate them with a pint of beer, then threw some money down on the counter and left. Even the aroma in our canteen — the various sandwiches we served, and perhaps coffee as well as tea – could sometimes recall those grander establishments.
I did no Army work, parades or drills. Barker and I appeared to live in a world apart from the masses there. As far as I was concerned, that could go on forever.
I never failed to call in on Marie-Louise, first thing in the morning. I never saw her except in the shop, at the counter or the cash desk; I sat on a box and she on a stool — Mama occasionally somewhere in the background. Speaking no English, she couldn’t join in the conversation, but she kept a maternal eye on us, so nothing else could go on. Not that it was likely to because Marie-Louise seemed the absolute soul of propriety. Moreover, she had a fiancé, a French officer who was away at the Front.’
*** This fond memory of one of his more pleasant tasks as a pre-war office boy at tin-mining company Lake & Currie’s City HQ Sam evokes fully in a chapter from the childhood section of his Memoir – when he was still writing in the third person and calling himself “Tommy”. Coming from a poor family, he relished the chance to snap up the leftovers from the feats he fetched in for the bosses as follows: “The company regularly held meetings with business associates and others, and when the partners considered those attending worth entertaining fairly well, a lunch would be laid on, bought in from nearby caterers. If a small, intimate group were invited, they would gather in the senior partner’s office. A day or so beforehand, Tommy had to visit the supplier to hand over the order – often at a famous restaurant and bar over in Cheapside called Sweetings*, where he observed really prosperous City businessmen, bosses all, who wouldn’t even spare the time to sit down to have their lunch. These toffs, as Cockneys called them, clad in fine morning suits, lined the long counter, munching, and drinking their ale or whatever they favoured. The smell of all these delicious foods pleased Tommy; he loved to stand there and look and breathe it in. White-hatted waiters dressed up as chefs carved succulent slices of beef or ham… In addition to the special drinks and foods the restaurant supplied, Tommy had to buy certain cheeses and a special type of coffee. This task took him to a shop of the old style where soft cream cheeses hung from the ceiling in muslin bags… Fortunately, in due course, Tommy would get the chance to do more than look at all this enticing provender.”

All the best – FSS

Next week: Sam gets a new partner on his trips into Le Havre… which leads to problems involving Cockney rhyming slang (“Wormwood Scrubs” anyone?), the local licensed prostitute and Marie-Louise heading off a minor international incident.

* In his 70s, Sam Sutcliffe wrote Nobody Of Any Importance, a Memoir of his life from childhood through Gallipoli, the Somme, Arras 1918 and eight months as a POW to the 1919 Peace parade.


** Just noting here an incident my father had no knowledge of, but which connected with his first experience of sailing abroad. On October 28, 1916, a mine wrecked the British hospital ship Galeka off Le Havre (no patients abroad, 19 RAMC personnel killed). When, earlier the war, she had served as a troopship, she conveyed my father’s 2/1st Royal Fusiliers from Southampton to Malta via an infernal storm in the Bay Of Biscay – see Sam’s Blog dated February 8, 2015.
Posted by FootSoldierSam at 00:30